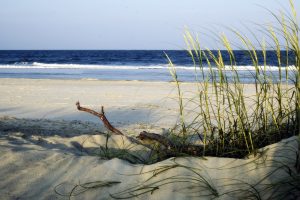 Also known as “Savannah Beach,” because of its close proximity to downtown Savannah, Tybee Island is a seaside resort town.

Popular activities on the small barrier island include:

•sunbathing, strolls, and picnics on the 5 miles of beach

•swimming in the ocean

•walks along the pier

•biking through town and along the coast

•exploring “Little Tybee Island,” (which is an uninhabited natural preserve)

•Beach Bum Parade (held every year in May)

Tybee Island Savannah beach is Georgia’s northernmost barrier island located 20 minutes east of historic Savannah. This unique delta island is bordered on the north by the Savannah River and the South Carolina low country, on the east by the Atlantic Ocean and the west and south by miles of marsh lands and uninhabited barrier islands.

The south end of Tybee island savannah beach is the main commercial tourist area with many motels, restaurants, bars and shops. The north end of the island is the quiet residential area of Ft. Screven. Active beginning in the late 1800’s, Ft. Screven was the main coastal defense system for the seaport of Savannah. After World War II the fort was decommissioned and deeded to the City of Tybee Island.

The Tybee Island Light Station, known as the Tybee Lighthouse, having lit the entrance of the Savannah River since 1736, is perhaps the most identifiable landmark on the island. It is one of the oldest U.S. lighthouses still in existence, and one of a few original lighthouses in full operation that still stands with its original base. Renovation commenced on the lighthouse in 1999, and in 2002 it was one of the first lighthouses transferred from federal to private ownership under the National Historic Lighthouse Preservation Act of 2000. It is now owned and managed by the Tybee Island Historical Society.

We use cookies on our website to give you the most relevant experience by remembering your preferences and repeat visits. By clicking “Accept”, you consent to the use of ALL the cookies.
Do not sell my personal information.
Cookie SettingsAccept
Manage consent

This website uses cookies to improve your experience while you navigate through the website. Out of these, the cookies that are categorized as necessary are stored on your browser as they are essential for the working of basic functionalities of the website. We also use third-party cookies that help us analyze and understand how you use this website. These cookies will be stored in your browser only with your consent. You also have the option to opt-out of these cookies. But opting out of some of these cookies may affect your browsing experience.
Necessary Always Enabled
Necessary cookies are absolutely essential for the website to function properly. These cookies ensure basic functionalities and security features of the website, anonymously.
Functional
Functional cookies help to perform certain functionalities like sharing the content of the website on social media platforms, collect feedbacks, and other third-party features.
Performance
Performance cookies are used to understand and analyze the key performance indexes of the website which helps in delivering a better user experience for the visitors.
Analytics
Analytical cookies are used to understand how visitors interact with the website. These cookies help provide information on metrics the number of visitors, bounce rate, traffic source, etc.
Advertisement
Advertisement cookies are used to provide visitors with relevant ads and marketing campaigns. These cookies track visitors across websites and collect information to provide customized ads.
Others
Other uncategorized cookies are those that are being analyzed and have not been classified into a category as yet.
SAVE & ACCEPT